For the Torah Observant Believer in Yeshua Messiah, Shavuot—The Feast of Weeks—Pentecost is about the giving and receiving of YHVH’s Torah and the establishing of the marriage covenant between YHVH and the Children of Israel. The Feast of Weeks is about the re-establishment of a broken covenant through the grace of YHVH and the outpouring of His Holy Spirit to aid fallen man in their keeping of the Creator’s instructions. Pentecost is about life and the establishing of the Body of Messiah through the atoning sacrifice of Yeshua Messiah and the infilling of the Holy Spirit.

What is Shavuot—The Feast of Weeks?

Shavuot is one of the seven-annual one of the 3-pilgrimage Feasts of YHVH. The instructions related to its keeping is found in the 23rd chapter of Leviticus. However, the origin of this set-apart day is founded upon the story behind the Creator’s giving of the commandments to the mixed multitude at the base of Mount Sinai as recorded in Exodus 19 through 24. 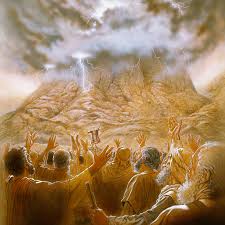 The first Shavuot was likely the day Israel received the Commandments of YHVH at Mount Sinai.

As the story goes, a mixed-multitude of souls, composed of the 12-tribes of Israel and various nationals from other nations, had escaped Egyptian-bondage roughly 50-days prior their settling at the base of Mount Sinai. YHVH, the Creator of the Universe, who bore this mixed multitude (with some estimates as high as 2 to 3-million souls) on eagles’ wings (Exodus 19:4) and brought them unto Himself. It was here and at this time that Father proposed a covenant between He and the Children of Israel that would be the shadow picture of an even greater covenant iteration in the years to come.

The 50-day trek from Egypt to Sinai foreshadowed the 50-day or 7-Sabbath Count (traditionally referred to as the Counting of the Omer) that begins at Wave Sheaf (i.e., Firstfruits) and culminates at Shavuot, also known as The Feast of Weeks and Pentecost in the Greek. (Read or listen to our discussion on the Day of Firstfruits.) (Read or listen to Hilary’s discussion on Pentecost-Shavuot and the Gospel of the Kingdom.)

We find in Exodus 19 that Father proposes the establishment of a Covenant between He and Israel, whereby He would be Israel’s God and Israel would be His special and favored people above all the nation-people of the world (i.e., their Elohim) if they would hear His voice and obey His instructions (i.e., His commands). The Children of Israel agreed to the terns of this covenant and on that fateful day, at the foot of Mount Sinai, YHVH, in the midst of fire, lightening, smoke and loud shofar blowing, spoke His commandments directly to the people. Although the people were terrified by this indescribable manifestation, even to the point of demanding that YHVH speak exclusively through Moses to them so as to not repeat this terrifying manifestation, the covenant was ratified by the sprinkling of blood upon the written contract and upon the people. 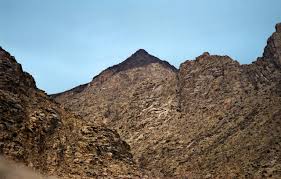 More and more evidence is emerging that supports the real Mount Sinai being in Arabia.

A covenant is an official, established agreement between 2 or more interested parties. A blood covenant, which is what the Sinai Covenant was, required that both parties swear to abide by the terms of the contract. YHVH, because He is Creator and Elohim, certified His agreement to abide by the terms of the covenant (i.e., He would be the nation’s God and the people would reap the benefits of being a special possession of YHVH), simply by stating His Name—I am YHVH. Israel’s certification to abide by the terms of the contract was embodied in the nation’s collective, verbal affirmation that they would obey YHVH’s instructions and not worship or follow any other god. Thus, the contract—the covenant—was ratified and sealed by the sprinkling of blood upon the written contract and the people.

For all intents and purposes: this very first Shavuot was a marriage. This was a marriage between YHVH and the nation of Israel. (See Hilary’s discussion on reconciliation of a broken marriage.)

The Covenant is Broken

It was only but a short time after the ratification of the marriage agreement between Israel and YHVH that the people broke the covenant.

Because this was a blood covenant, if either party were to violate the terms of the contract, their life would be required of them. It goes without saying that YHVH could not—would not—violate the terms of the covenant. Israel, on the other hand, because they failed to have the Spirit of YHVH and His Torah (i.e., YHVH’s instructions) implanted in their hearts, returned to the worship of their Egyptian god (i.e., the Golden Calf) while Moses was attending to sacred business on the Holy Mountain (Exodus 32).

Despite the nation breaking the Sinai Covenant, the Almighty continued to honor the covenant. Israel cheated on her spouse YHVH. Yet YHVH did not put Israel, His bride away immediately; at least not until many centuries later when Israel delved so deep into idolatry that they could no longer hear the voice of YHVH and had completely turned their back upon their Elohim. That’s when YHVH divorced His bride Israel and the nation was left to suffer through a severe fracturing of the nation into two, followed by several usurpations, exiles and captivities at the hands of pagan nations and rulers.

The Father knew that His people would break the marriage covenant from the very beginning. Thus, He set into motion a plan that would re-invigorate that broken covenant and re-establish the nation of Israel (both Houses of Israel—Judah and Israel) back to her favored state as His chosen people. This re-established covenant would be the Sinai Covenant on steroids. For not only would the Father bring back the original covenant to be followed by a reconstituted nation of Israel, it would be extended to the nation peoples of the world if they too agreed to the terms of the agreement. But Father did not stop there. Knowing the inherent problems His people originally had keeping His instructions, He would give His children the help they needed to keep His instructions and to ensure their success in staying in covenant with Him. This He would accomplished through the outpouring of His Holy Spirit upon His elect. Thus the Creator of the Universe’s presence would be within each one of His chosen people, and that Holy Spirit would inscribe Torah—Abba’s instructions—upon each and every heart and mind. (Read or listen to Hilary’s teaching on the New Covenant.)

Of this New Covenant, the Prophet Jeremiah wrote:

This prophecy was confirmed by the Prophet Ezekiel who wrote:

“And I will give them one heart, and put a new spirit within them. And I will take the heart of stone out of their flesh and givem them a heart of flesh that they may walk in My statutes and keep MY ordinances and do them. Then they will be My people, and I shall be their God” (Ezekiel 11:19, 20).

Down Payment on the Renewed Covenant

The giving of Torah at Mount Sinai was a shadow picture of the Day of Pentecost when YHVH’s Holy Spirit was poured out upon the disciples of Yeshua.

Although the New (or Renewed) Covenant has not been fully enacted, we saw the down-payment of it played out on the Temple Mount on Shavuot, just 10-days after Yahoshua commissioned His disciples on the Mount of Olives and then ascended up on high. On that fateful day, Pentecost 28 C.E., the Holy Spirit (i.e., the Ruach HaKodesh) was poured out upon the disciples of Yeshua who were attending Shavuot, gathered on the Temple Mount (Acts 2). This was the fulfillment of the “shadow picture” of the very first Shavuot at Mount Sinai. At the first Shavuot, YHVH gave the Children of Israel His Torah—His instructions—His commandments. On the Day of Pentecost in 28 C.E., YHVH gave the Children of Israel (i.e., the disciples of Yeshua HaMashiyach) His Holy Spirit. Thus we see how Torah became fully manifested and is Spirit within the people YHVH. At the time of the first Shavuot, 3,000 souls perished because Israel chose to break the covenant. At the time of Pentecost on the Temple Mount, 3,000-souls entered the Body of Messiah and into life eternal.

The Importance of Shavuot For Messianic Believers Today

Shavuot remains relevant to every Torah Observant Believer in Messiah today. Beyond the fact that we are commanded by YHVH to keep Shavuot (Leviticus 23:21, 22), we gain invaluable and crucial understanding of the New (Renewed) Covenant that Messianics are now privileged to be under. Shavuot is important in reminding Messianic Believers of the importance of keeping Torah and being in a right-relationship with the Creator of the Universe. Shavuot also serves as a prompt for every Torah Observant Believer to seek the leading and guidance of the Holy Spirit in their lives such that they live lives of their chosen status as Kings and Priests of YHVH Elohim. And Shavuot teaches the Messianic Believer that just mechanically keeping Torah is not to secure their place in the Kingdom of YHVH. Torah is Father’s house-rules that help us maintain a substantive relationship with Him. Admission into the Kingdom of YHVH is gained through the shed blood of YHVH, for salvation is a gift from Yah. YHVH’s Holy Spirit aids the believer in his/her keeping of the Creator’s house-rules in the midst of his/her living in this corrupt and dying world.

Shavuot then is about living the life that the Creator of the Universe always had in mind for His chosen people. Shavuot is living life in the Spirit. (Read or listen to our discussion related to living a life beyond the norm.)

The keeping of Shavuot by today’s Torah Observant Believer in Yeshua Messiah is pretty simple. We find in Leviticus 23: 21 that Messianics are to:

With the Temple in Jerusalem no longer in existence, Messianics can not truly keep Shavuot as one of the 3-pilgrimage Feasts of YHVH and as instructed in Torah (Exodus 23:14-17; Deuteronomy 16:16). However, under the auspices of the renewed covenant, the believers’ bodies have replaced the Temple proper as the dwelling place of YHVH (1 Corinthians 3:16; 6:19). Thus, wherever 2 or 3 have gathered together in their Master’s Name, there He will be in their midst (Matthew 18:20).

Thus every Torah Observant Believer in Yahoshua Messiah is obliged to keep Shavuot in Spirit and in Truth. The actual method for keeping the Feast of Weeks is strictly between the individual believer and YHVH (Colossians 2:16, 17; Romans 14:5).