The Gospel Your Pastor Never Taught You (Part 2) 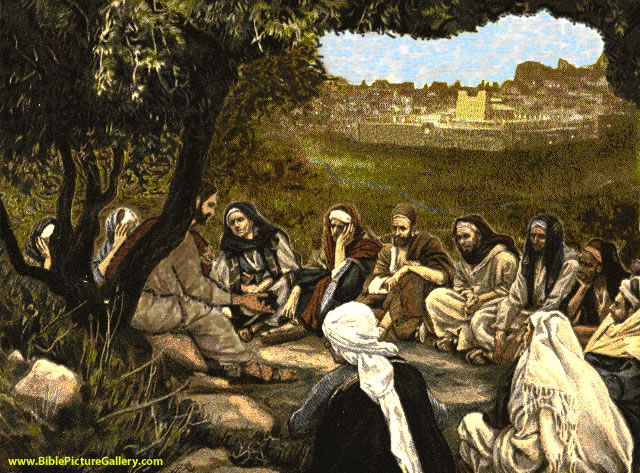 Yahoshua told His disciples that He teaches in parables to hide the secrets of the kingdom from those who were not good soil. THESE SECRETS ARE FROM THE FOUNDATION OF THE WORLD. Thus, His messages contain secrets to the kingdom and the secrets are not for everyone.

From the Parable of the Sower, Matthew 13:3-23, taught and interpreted by Yahoshua, we learned why each ground produced a different result for the sower.  To summarize the results from the four grounds:

The path was unfruitful because this is the person who heard the word of the kingdom but had no understanding, so lost the word to the evil one who snatched it away. The  rocky soil, is the person who heard the word, received it gladly; but had a shallow understanding because the word couldn’t anchor securely in their heart.  Therefore, when persecution came because of the word, this person rejected the word and produced no fruit.   Seed fell among thorns, which grew up and choked the plants. “This is he that hears the word; and the care of this world, and the deceitfulness of riches, choke the word, and he becomes unfruitful”. This person was unable to produce fruit because The false security provided by his wealth and riches deceived him to put his trust in his wealth (Matthew 19:21).  Proverbs 18:11 tells us that the rich man wealth is his strong city.

The  good soil produced fruit,  hundred, sixty or thirty times what was sown. The person is growing in understanding of the secrets of the kingdom, and his understanding continues to increase exponentially. The children of the kingdom gladly hear and receive the word of the kingdom. Good soil is pleasing to the master. Of the four soils, this would be the soil in the end that hears the words from Yahoshua, “Well done good and faithful servant, you have been faithful in a little and I will make you ruler over much”.   Proverbs 4:7 tells us to get wisdom because it is essential, but in all we get, get understanding.

“24 Another parable put he forth unto them, saying, The kingdom of heaven is likened unto 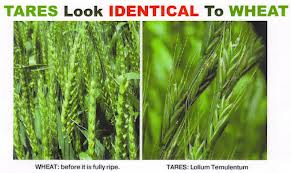 a man which sowed good seed in his field: 25 But while men slept, his enemy came and sowed tares among the wheat, and went his way. 26 But when the blade was sprung up, and brought forth fruit, then appeared the tares also. 27 So the servants of the householder came and said unto him, Sir, didst not thou sow good seed in thy field? From whence then hath it tares? 28 He said unto them, an enemy hath done this. The servants said unto him, Wilt thou then that we go and gather them up? 29 But he said, Nay; lest while ye gather up the tares, ye root up also the wheat with them. 30 Let both grow together until the harvest: and in the time of harvest I will say to the reapers, Gather ye together first the tares, and bind them in bundles to burn them: but gather the wheat into my barn”.

Yahoshua Interprets the Parable of the Tares among the Wheat

36 Then Jesus sent the multitude away, and went into the house: and his disciples came unto him, saying, Declare unto us the parable of the tares of the field. 37 He answered and said unto them, He that soweth the good seed is the Son of man; 38 The field is the world; the good seed are the children of the kingdom; but the tares are the children of the wicked one; 39 The enemy that sowed them is the devil; the harvest is the end of the world; and the reapers are the angels. 40 As therefore the tares are gathered and burned in the fire; so shall it be in the end of this world. 41 The Son of man shall send forth his angels, and they shall gather out of his kingdom all things that offend, and them which do iniquity; 42 And shall cast them into a furnace of fire: there shall be wailing and gnashing of teeth. 43 Then shall the righteous shine forth as the sun in the kingdom of their Father. Who hath ears to hear, let him hear.

Lesson #1. this parable shows us the love, patience and care Yahoshua has for the children of the kingdom. He will do nothing that will cause hurt or harm to come to them. Lesson#2. from a distance tares and wheat look similar, but the difference can be seen upon close scrutiny and at the time of maturity when they produce fruit. The fruit of the children of darkness (tares) betrays their hidden identity as they produce false teachings and false prophecy, and their works of iniquity (2 Peter 2:1, Matthew 7:15). When Yahoshua pronounces judgment at the end of the world, their destination will be the fiery furnace where they will be burned. The destination of the children of the kingdom of Yahovah (wheat) will be the kingdom of Yahovah. The children of Yahovah are righteous and are called the children of light.

Parable of the Mustard Seed“The kingdom of heaven is like to a grain of mustard seed, which a man took, and sowed

in his field: 32 Which indeed is the least of all seeds: but when it is grown, it is the greatest among herbs, and becomes a tree, so that the birds of the air come and lodge in the branches thereof.”

Yahoshua did not interpret this parable so we are not certain what He was thinking when He compared the kingdom of heaven to a mustard seed. However, based on the previous parables we can assume that the man who sowed the seed is either Yahoshua or his disciple and the field is the nations of the world.  In this parable He planted the mustard seed which is about the size of a grain of salt; but produces a tree about 9-10 feet tall, with low hanging branches.

While there are approximately forty different varieties of mustard seed plants, only three of them produce mustard seeds. Its phytonutrient compounds protect against gastrointestinal cancer. It is an excellent source of selenium, which is a nutrient that has been shown to help reduce the severity of asthma, decrease some of the symptoms of rheumatoid arthritis, and help prevent cancer. It is also an excellent source of magnesium, which has been shown to help reduce the severity of asthma, to lower high blood pressure, to restore normal sleep patterns in women having difficulty with the symptoms of menopause, to reduce the frequency of migraine attacks, and to prevent heart attack in patients suffering from atherosclerosis or diabetic heart disease. For more information go to http://www.whfoods.com/genpage.php?tname=foodspice&dbid=106

While studying this parable I was seeking the wisdom of Yahoshua on how to present this parable because I didn’t want to put forth my interpretation. After praying, the word that popped into my mind was potent. So I looked up the meaning of the word potent. Some applicable synonyms for potent are: powerful, strong, effective, forceful, compelling and persuasive.

Mustard seed is a spice that is potent meaning it has a strong physiological and medicinal effect on the body and mind when it is consumed. The seeds can also be pressed to make mustard oil, and the edible leaves can be eaten as mustard greens. Hippocrates, the father of medicine, used mustard seed medicinally. Mustard seeds are an excellent source of selenium and a very good source of omega-3 fatty acids and manganese. They are also a good source of phosphorus, magnesium, copper, and vitamin B1.  So it is no wonder Yahoshua likened this particular seed to the kingdom of heaven.

The Kingdom of Heaven possesses great physical, political and military strength and power as a potent force to be contended with as it obliterates the kingdom of darkness. It is powerfully persuasive in making the case for reciprocating the love of Yahovah through obedience and worship. It represents the gospel of the kingdom that is recorded in the Torah and the prophets. The message is powerful, strong, effective and persuasive. Therefore the parable says in verse 32, “But when it is grown, it is the greatest among herbs, and becomes a tree, so that the birds of the air come and lodge in the branches thereof.” When I reflected on the healing properties of the mustard seed and the mustard tree, I remembered the tree of life in the Garden of Eden, and the tree of life which we will again have access to according to Revelation 22:2 that says, “ In the midst of the street of it, and on either side of the river, was there the tree of life, which bare twelve manner of fruits, and yielded her fruit every month: and the leaves of the tree were for the healing of the nations.” This is why the kingdom of heaven is like a mustard seed. Though the word fits in our heart it produces healing, rest and food for the nations. Read Revelation 22:1-3 for the full context.

I hope you received some valuable insights into these parables. Thank you for subscribing to this podcast. Please share it with your friends.

This entry was posted in Blog Posts, Its Not As You Perceive Podcast Episodes and tagged benefits of mustard seed, gospel of the kingdom, It's not as you perceive, kingdom of heaven is like, mustard seed parable, parables, secrets of the kingdom, sower parable, tares and wheat parable, the gospel your pastor never taught you part 2, Yahoshua. Bookmark the permalink.
HTML Snippets Powered By : XYZScripts.com