Gospel of the Kingdom of God, Part 3–It’s Not As You Perceive, Episode 75

Who Are the Sons of God?

Part 3 of the Gospel of the Kingdom of God

If you’ve not already done so, before you listen to this episode, please listen to “The Gospel of the Kingdom of God, Part 1. and Part 2 so you can get caught up and get a better grasp of the material being covered today.

The apostle Paul admonished us in Ephesians 6:13-18, saying:

13 Wherefore take unto you the whole armor of God, that ye may be able to withstand in the evil day, and having done all, to stand.14 Stand therefore, having your loins girt about with truth, and having on the breastplate of righteousness;15 And your feet shod with the preparation of the gospel of peace;16 Above all, taking the shield of faith, wherewith ye shall be able to quench all the fiery darts of the wicked.17 And take the helmet of salvation, and the sword of the Spirit, which is the word of God:18 Praying always with all prayer and supplication in the Spirit, and watching thereunto with all perseverance and supplication for all saints;

So in this series on The Gospel of the Kingdom of God, we are putting on the whole armor of God.

Today, in Part 3, we will answer the question: “Who are the Sons of God?” 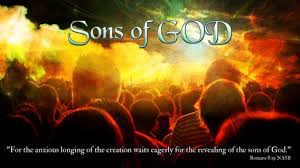 Who Are the Sons of God?

The material in this section is will run longer than the previous sections.  Therefore I will complete it in about two or more sessions so that it will not be too much information to digest in one sitting.

On planet earth, There are 3 groups of people: 1) the Children of God who are sealed unto redemption; 2) the marked people of God who will be sealed later and 3) the children of Satan (the devil).

The children of God are His elect. These are the disciples and friends of Yahoshua (John 15:14). Some followed and obeyed him in person when he was on earth and the others have been following him by faith from the time he returned to heaven and will continue until he returns to earth. They obey his commandments (John 15:10). His commandments are the same as his Father’s commandments: Love God and Love your neighbor; these are the two commandments on which the Ten commandments hang. Yahoshua regards these people as his friends. He said, “Ye are my friends, if ye do whatsoever I command you. (John 15:14)   All the disciples of Yahoshua from the time of his ministry, all the way to the time of his second coming, are given to him by his Father, Yahovah.

The elect is sealed unto redemption.  They have submitted their lives to the authority of Yahovah, they abide in Yahoshua according to John 15:5-8; and they believe the gospel of the Kingdom of God.  Yahoshua has baptized them with the baptism of the Holy Spirit. Paul tells us in Romans 8:13-14, “For if ye live after the flesh, ye shall die: but if ye through the Spirit do mortify the deeds of the body, ye shall live. 14 For as many as are led by the Spirit of God, they are the sons of God.”

Also, 28 And we know that all things work together for good to them that love God, to them who are the called according to his purpose.  29 For whom he did foreknow, he also did predestinate to be conformed to the image of his Son, that he might be the firstborn among many brethren. 30 Moreover whom he did predestinate, them he also called: and whom he called, them he also justified: and whom he justified, them he also glorified. (Romans 8:28-30 ) However, 30 “And grieve not the holy Spirit of God, whereby ye are sealed unto the day of redemption”. (Ephesians 4:30)  Peter encourages us to grow in the fruit of the spirit, 10 “Wherefore the rather, brethren, give diligence to make your calling and election sure: for if ye do these things, ye shall never fall: (2Pe 1:10). Yahoshua prayed for his disciples before he left saying: “9 I pray for them: I pray not for the world, but for them which thou hast given me; for they are thine. (John 17:9)

The marked people of God are not yet sealed, and may or may not be currently submitted to the authority of God at this time; but they are marked to be sealed at a later date; because Yahovah knows them that are His. (2 Timothy 2:19) 14 For many are called, but few are chosen.(Matt 22:14)

The Children of Satan are the unrighteous people who have not submitted to the authority of God and they do not believe the gospel of the kingdom of God. In John 8:44-47 Yahoshua said the Pharisee leaders of the Sanhedrin:  44 “Ye are of your father the devil, and the lusts of your father ye will do. He was a murderer from the beginning, and abode not in the truth, because there is no truth in him. When he speaks a lie, he speaks of his own: for he is a liar, and the father of it.

These children of Satan are Not marked to be sealed unto redemption.  John 3:19 tells us, “19 And this is the condemnation, that light is come into the world, and men loved darkness rather than light, because their deeds were evil. (John 3:19)

In Matthew 22:2-14, Yahoshua used a parable to teach about the Kingdom of God. This is the Parable of the Wedding Banquet. He said,  2 “The kingdom of heaven is like unto a certain king, which made a marriage for his son, 3 And sent forth his servants to call them that were bidden to the wedding: and they would not come. 4 Again, he sent forth other servants, saying, Tell them which are bidden, Behold, I have prepared my dinner: my oxen and my fatlings are killed, and all things are ready: come unto the marriage.         5 But they made light of it, and went their ways, one to his farm, another to his merchandise: 6 And the remnant took his servants, and entreated them spitefully, and slew them. 7 But when the king heard thereof, he was wroth: and he sent forth his armies, and destroyed those murderers, and burned up their city. 8 Then saith he to his servants, The wedding is ready, but they which were bidden were not worthy. 9 Go ye therefore into the highways, and as many as ye shall find, bid to the marriage. 10 So those servants went out into the highways, and gathered together all as many as they found, both bad and good: and the wedding was furnished with guests.  11 And when the king came in to see the guests, he saw there a man which had not on a wedding garment: 12 And he saith unto him, Friend, how camest thou in hither not having a wedding garment? And he was speechless.13 Then said the king to the servants, Bind him hand and foot, and take him away, and cast him into outer darkness; there shall be weeping and gnashing of teeth. 14 For many are called, but few are chosen. (Mat 22:2-14 )

God’s Elect are God’s chosen nation. These are the people that He foreknew, and predestined to be the Sons of God.  8 “When the Most High gave the nations their inheritance, When He separated the sons of man, He set the boundaries of the peoples according to the number of the sons of Israel.  9 “For Yahovah’s portion is His people; Jacob is the allotment of His inheritance. (Deuteronomy 32:8-9 )

1 Response to Gospel of the Kingdom of God, Part 3–It’s Not As You Perceive, Episode 75