It’s Not As You Perceive, Episode 48–Halloween, Christianity and the Bible

Posted on October 30, 2014 by Hilary
In the West, this coming Friday–October 31st–will be Halloween. It is a time deemed primarily for children, although many adults take great pleasure in celebrating that night as well. As the day wanes and night settles in, millions of children will emerge from their homes, dressed as some of their favorite characters, going from house to house seeking after candies and other desirable treats. Parents and adults alike take great pleasure in the tradition by dressing up their homes in ghoulish and macabre themes, creating scary pranks and participating in festive social gatherings. The central themes of Halloween are death and the occult. Halloween’s origins can not fully be explained, but history strongly links the night to an ancient pagan-class of the Celtic peoples known as the Druids, common to Gaul, Ireland and Britain, as far back as the 3rd century B.C.E. A high holy day of the Druids as well as an agricultural-fall festival for many of the

Gaelic peoples was Samhein [pronounced SAH-WIN]. Samhein was jammed packed with occultic and pagan traditions and beliefs. These occultic and pagan elements gripped the Gaelic peoples in fear and entrapped them in a demonic-religion. Yet seeing a great opportunity for increasing the number of adherents to the Romish Church of the 6th century, the papacy devised yet another plan to marry Christianity to a prominent pagan people and their religion. The Church triumphant compromised huge portions of the truth that was delivered to the first century saints by forcibly developing and standing up pious festivals that seemed to honor the triune Godhead and the ever growing body of dead saints, while appeasing those on the Church rolls who still held allegiance to some of their pagan ways of life. This pagan segment of the Universal Church were permitted to retain many, if not most, of their pagan traditions and practices, just as long as these traditions and practices were done to honor the Church’s dead saints. Thus, over the centuries, like Christmas and Easter, many of the central themes and traditions of the pagan–in this case the Druids and Samhein–were favorably accepted by the papacy and the Church body and became ceremoniously part of the Church’s holy days 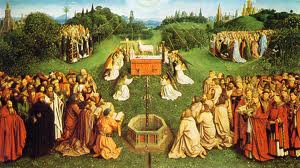 of All Souls Day and All Saints Day, ultimately being nicely wrapped in to All Hallows Eve or Halloween. Despite the Reformation of the 16th century C.E., the protestant Church could not fully shake off these pagan-based Church festivals which we’ve received today as beautifully packaged and seemingly harmless, fun, family-centered and even holy holidays. Sadly, the vast majority of Christian adherents in the world are either ignorant of the pagan-origins of popular holidays such as Halloween; they don’t care either way; or they believe that Christians should embrace such holidays as wonderful opportunities to enhance their Christian lives. Indeed, the lie has been spun by the enemy and millions have fallen in to the trap as it relates to the observance and celebration of Halloween. But how must truth seeking believers in Messiah fall out on the issue of Halloween? 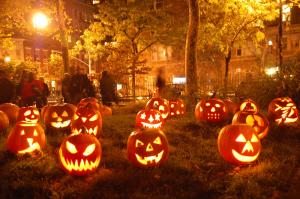 Halloween or Hallowe’en (/ˌhæləˈwiːn, –oʊˈiːn, ˌhɑːl–/; a contraction of “All Hallows‘ Evening“),[6] also known as Allhalloween,[7] All Hallows’ Eve,[8] or All Saints’ Eve,[9] is a yearly celebration observed in a number of countries on 31 October, the eve of the Western Christian feast ofAll Hallows’ Day. It initiates the triduum of Allhallowtide,[10] the time in the liturgical year dedicated to remembering the dead, including saints(hallows), martyrs, and all the faithful departed believers.[11] Within Allhallowtide, the traditional focus of All Hallows’ Eve revolves around the theme of using “humor and ridicule to confront the power of death.”[12]

According to many scholars, All Hallows’ Eve is a Christianized feast initially influenced by Celtic harvest festivals,[13][14] with possible paganroots, particularly the Gaelic Samhain.[8][15][16]

Today’s Halloween customs are thought to have been influenced by folk customs and beliefs from the Celtic-speaking countries, some of which have pagan roots, and others which may be rooted in Celtic Christianity.[35][36] Indeed, Jack Santino, a folklorist, writes that “the sacred and the religious are a fundamental context for understanding Halloween in Northern Ireland, but there was throughout Ireland an uneasy truce existing between customs and beliefs associated with Christianity and those associated with religions that were Irish before Christianity arrived”.[37] Historian Nicholas Rogers, exploring the origins of Halloween, notes that while “some folklorists have detected its origins in the Roman feast of Pomona, the goddess of fruits and seeds, or in the festival of the dead called Parentalia, it is more typically linked to the Celtic festival of Samhain“, which comes from the Old Irish for “summer’s end”.[35]
Samhain/Calan Gaeaf marked the end of the harvest season and beginning of winter or the ‘darker half’ of the year.[41][42] … it was seen as a liminal time, when the spirits or fairies (the Aos Sí) could more easily come into our world and were particularly active.[43][44] At Samhain, it was believed that the Aos Sí needed to be propitiated to ensure that the people and their livestock survived the winter.
How did Halloween Become a Bedfellow to Christianity?
“Occult Holidays or God’s Holy Days-Which?” by Fred R. Coulter (York PUblishing Company–ISBN 978-0-9675479-7-8)
“My Catholic Faith” by Louis LaRavoire Morrow (My Mission House, 1963)
Views by Certain Christian Leaders and the Prevailing Christian Attitude Regarding Halloween
This entry was posted in Its Not As You Perceive Podcast Episodes and tagged All Hallows Eve, all saints day, all souls day, audioblog, bible, Catholic Church, Catholicism, christianity, dead, death, Druids, Fred Coulter, Halloween, Hebraic Roots, messianic believer in messiah, pagan, podcast, Pope Gregory the Great, Qumran Family Church, saints, samhein, souling, spirits, the messianic torah observer, Torah, Truth, witches. Bookmark the permalink.
HTML Snippets Powered By : XYZScripts.com