Episode 17–Why is Hanukkah Not In My Bible 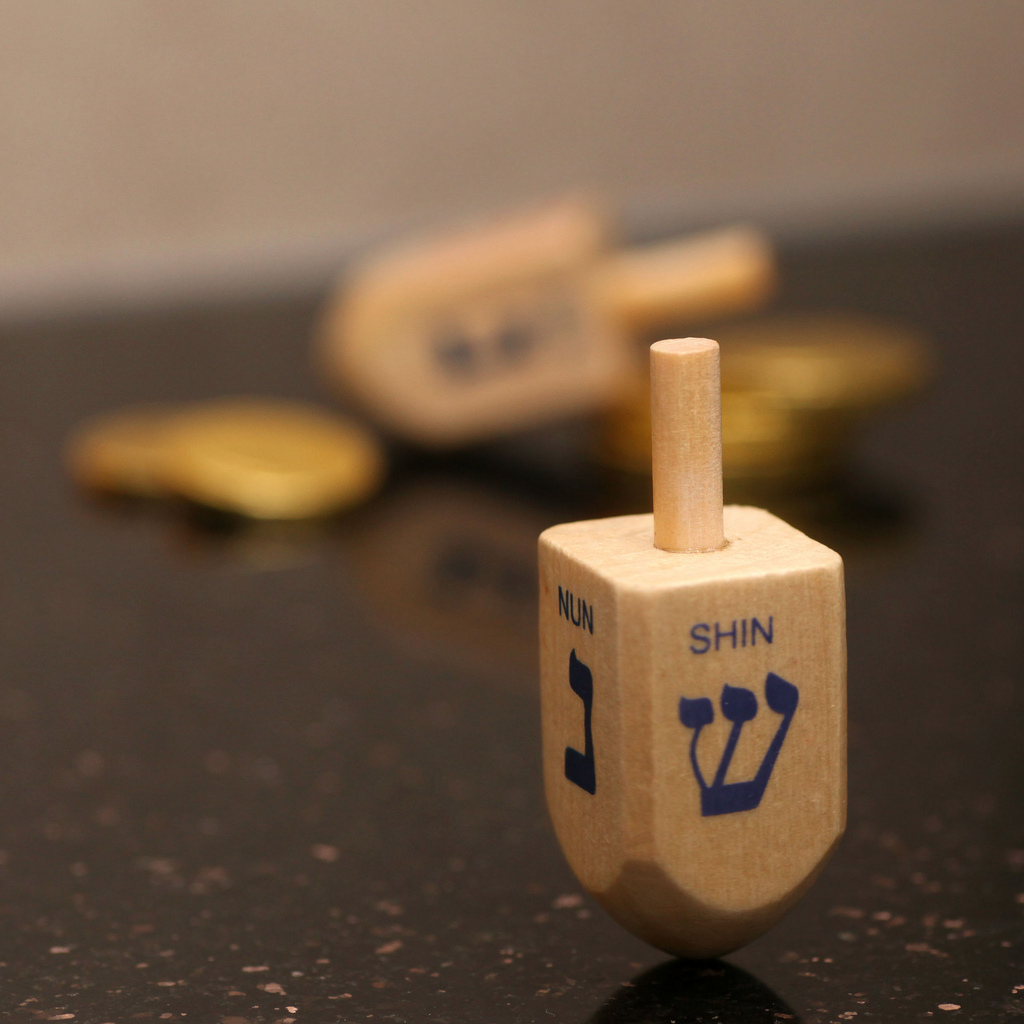 The celebration of Hanukkah is also called the Feast of Dedication, mentioned in John 10:22-30 of the New Testament; however, there are no details about the Feast in this brief mention, except that Yahoshua attended this feast, and he taught in parables there. Hanukkah usually falls in the winter months near or around Christmas. However, this year, the first day of Hanukkah fell in the time of Thanksgiving celebrations in the United States, causing more people to inquire about this Hebrew celebration.

Many of the stories told by Jewish people for generations, about the reason for this celebration, refer to a miracle of lights that occurred when the Jews repossessed the Temple in 164 BC. We are told that Hanukkah is called the Festival of Lights because a miracle happened there that kept the menorah in the temple burning, producing light in the temple for eight days, even though there was only enough oil in the menorah to provide light for one night; and that my friend is why Hanukkah is celebrated for eight days, and for Hanukkah, there are eight branches for candles on the menorah (not including the servant candle).

Well, I have a theory about where that story came from but I will reserve my opinion about that. But suffice it to say, no such thing happened. I encourage you to learn for yourself what the 8 days of celebration were all about, and what the miracles were that happened there. The account of the events can be found in First and Second Maccabees books. These books can also be found in the

“The Antiquity of the Jews” Book 12 (First Maccabees) and Book 13 (Second Maccabees), written by the Jewish historian Flavius Josephus; the Roman Catholic Bible and the Greek Septuagint. You can also find it on the internet under the search terms, Apocrypha, and Maccabees.  Purchase as a hard copy or an electronic download. By reading the books for yourself you will understand the events leading up to the celebration, why the feast was celebrated for eight days and what the true miracles were.

The history surrounding why the books of Maccabees are not in the protestant Christian bible has its roots in the Protestant Christian Reformation movement. Here is a short account of how it all happened. In 382 AD Pope Damasus at the Church Council of Rome, approved the cannon of 73 divinely inspired books that make up the current Roman Catholic Bible. The cannon of 73 Books were later ratified in 393 AD and 397 AD at Church Councils held at Hippo and Carthage respectively.

Since that time, all future Popes reaffirmed the ratification of the cannon of 73 books; and the reaffirmation continued all the way to the year 1546 at the council of Trent. The books, Maccabees I &II are found in the Old Testament of the cannon of 73 Books.

Martin Luther, the leader of the Protestant Reformation, became disgruntled with the Roman Catholic Church and sought to remove 9 Old Testament books, and 4 New Testament books from the cannon. The books that he sought to remove are: Tobit, Judith, Baruch, Wisdom, Sirach, First Maccabees, Second Maccabees, Daniel, and Esther from the Old Testament. He did not like the some verses in Daniel and Esther because those verses in these books did not meet the approval of his doctrine. Well, he lost this battle with the Roman Catholic Church.

The reformer also wanted to remove the following books from the New Testament: James, Hebrews, Jude and Revelation also because they too did not support his doctrine. The Roman Catholic Church did not give into his demands and they maintained those books in the cannon of 73 books. Martin Luther lost another battle with the Church.

To get his point across while promoting his agenda against the teachings of the Roman Catholic Church, Luther targeted the church’s teachings on indulgences as a platform from which to launch his protest against the cannon of 73 books. In 1517, in protest to the Church’s practice of indulgences, Martin Luther nailed his bulletin, “95 Theses of Contention” to the door to the entrance his church and it ignited many debates about the teachings of the Roman Catholic Church, leading to The Great Schism of 1521. This led the Catholic Church under Emperor Charles V, to put Luther on trial, and through executive council, declared Luther a heretic, his literature was outlawed, he was excommunicated from the church and a death sentence was placed on him by The Edict of Worms following his trial. This drove Luther into hiding, fearing for his life.

From the date of the establishment of the Latin Vulgate Cannon in 382 AD and throughout the protestant movement all the way to the 1880’s, the Roman Catholic Church held proprietary rights to the Cannon which they had translated from Greek to Latin. The Church threatened to kill anyone who read the Bible in any other language other than Latin, even though Greek scholars noted that the Latin was a poor translation from the Greek. The Protestants contended that all people should be able to read the Bible in their own language causing the Latin Vulgate to be translated into many other languages, in spite of the ban on translations into other languages declared by the Roman Catholic Church. Still, the only legal cannon was the Latin Vulgate.

With copies of the Latin Vulgate translated into other languages, the protestant reformation movement picked up pace in 1522 while Luther was in hiding. By 1526 the Roman Catholic Church realized they were losing the battle against the Protestants, in spite of the many protestant martyrs they had created, due to The Edict of Worms. Finally, the church decided to loosen their reigns and annulled The Edict of Worms, giving Protestant Christians the right to worship freely without obligation to the Papal Bull. Up until this time, the protestant Christian scholars, though they had translated the Latin Vulgate into other languages, they had not printed their own protestant Bible based on their desired cannon, in their protest of the cannon of 73 Books.

Due to the annulment of the Edict of Worms in 1526, many protestant Christian scholars all over the world were now free to publish their papers, challenging the Church’s interpretation of Bible passages, and the church’s doctrine. By 1529 the worldwide Protestant Christian reformation movement had attracted many scholars publishing their many opinions. This worldwide debate now challenged the protestant beliefs, leading to conflict of many opinions within the protestant Church. Some of the topics of contention focused on the meaning of the elements of the sacrament of Holy Communion; salvation by grace versus salvation by works; the ideas of once saved always saved; and the ability to lose ones salvation, just to name a few.

As more scholars worldwide began to participate in the doctrinal debates stemming from Luther’s “95 Theses of Contention”, other schools of thought sprang up under the protestant movement leading to more separations and denominations within the protestant Christian movement.  Now, the once united and uniformed protestant beliefs began to splinter based on the varying opinions, giving rise to protestant denominations. In 1534 in England, The parliament delivered The Act of Supremacy to King Henry VIII of England giving him supreme authority over the Roman Catholic Church in England. King Henry VIII quickly exercised his authority and power over the Church and converted the Roman Catholic Church in England forming the Church of England (the Anglican Church), giving rise to first official Protestant Christian church. In spite of the many Bibles translated into other languages and printed by protestant Christians, Protestants all maintained the official use of the Roman Catholic cannon of 73 books. Though the printing press was already invented in 1448, the cost of mass production printing was cost prohibitive.

However, by 1611, the technology of the printing press was upgraded from that of 1448. Therefore, King James had a better technology at his disposal to mass produce Bibles for all English speaking households. Therefore, in 1611, in keeping with the mission to have the Bible available to the common man, woman and child in his own language, King James I, authorized the first complete cannon of 73 books into the King’s English. Surprisingly, that same year, another King James Bible was printed with only 66 Books. This second printing of the King James Bible became what is now the standard or cannon for the Protestant Christian church. Today these printings of 1611 are both referred to as originals. This is because the first original printing had 73 books; but the second original printing had 66 Books.