The Gospel of the Kingdom, Part 1–It’s Not As You Perceive-73

Part 1 in a Multi-Episode Series on the

Gospel of the Kingdom of God

It’s Not As You Perceive–73 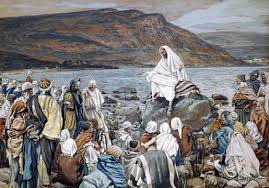 What is the true meaning of the Gospel of the Kingdom that Yeshua taught?

Matthew records Yahoshua’s commission to us in Mat 28:18-19, saying: “All power and authority has been given to me in heaven and in earth. Go! Teach all nations to carry out all the things that I have commanded you, forever.”

Again, in Matt. 24:14, Yahoshua said, “And this gospel of the kingdom shall be preached in all the world for a witness unto all nations; and then shall the end come. Then we read the same commission again from Yahoshua to us in Mark 16:15-16: “Go ye into all the world, and preach the gospel to every creature. 16 He that believeth and is baptized shall be saved; but he that believeth not shall be damned.”

In Luke 24:47 we read Yahoshua’s final command to his disciples just before he ascended to heaven. He told them, repentance and remission of sins should be preached in his name among all nations, beginning at Jerusalem.

While the death, burial and resurrection of Yahoshua is an important gospel, for the world, it is not the gospel that Yahoshua preached. However, it was important to start the gospel message by preaching about Yahoshua because he was the highlight of the current events; and it was well known that he had resurrected from the dead, a miracle that had everyone thinking! They also knew him well, and all the good he had done: a righteous man who did many miracles before their eyes through the power of God! Being aware of his life among them and being aware and the current events, which were fresh in their minds, made the topic of salvation in his name, the logical place to start the gospel message.

Before he was crucified, his followers and well wishers hoped he was the long awaited Messiah; but when he was crucified their hopes were dashed. Now that he was resurrected from the grave, and hundreds of people saw him with their own eyes, it was easy to preach the rest of the story of why he came and how he fulfilled the messianic prophecies.

As a result, Peter and the other disciples stood up on Shavuot (Day of Pentecost) and delivered the message that Yahoshua is Messiah and their only hope of salvation is to repent and be baptized in the name of Yahoshua for the remission of their sins and after which they will receive the baptism of the Holy spirit, like they have just received. Now that the people believed the truth about the Son of God, Yahoshua, that he is Messiah, they later learned that his rejection, suffering and crucifixion was ordained by God for the sins of the world.

But before they could preach the meat of the word, the disciples had to preach the death, burial and resurrection message to lay the foundation for the gospel of the kingdom of God, establishing that Yahoshua is the Messiah, Yahovah’s appointed King over Israel.

So do we have two gospels?

The answer is NO! Yahoshua preached one gospel and it is the gospel that the apostles preached in obedience to his commission.

Some Christian pastors who acknowledge that they are not preaching the Gospel of the Kingdom of God, have concluded that there are two gospels: the gospel of grace; and the Gospel of the Kingdom of God. The Christian rationale is that the Jews were given the law, so they are under the law and must obey the law. But Christians are not under the law, they are under grace because Jesus nailed the law to the cross and the law is done away with. But, what they are preaching is not the gospel of grace. It is the gospel about Jesus: his death, burial and resurrection.

Yahoshua taught the gospel of the Kingdom of God starting with Genesis, and going through the Prophets and the Psalms, showing that the scriptures all spoke of him, and pointed to his coming and the work he would do. Remember, the New Testament was not written at the time of Yahoshua, and the apostles ministries so their sermons came from the Old Testament.

Therefore, if we want to get a good understanding of the gospel that Yahoshua preached, we must return to the Torah, the Psalms and the Prophets to see the text they used as references for their sermons and teachings, in order to put it all in context. This is the only way we will be able to fully understand the Hebrew mindset behind the language of the gospel of the Kingdom that we read in the New Testament.

“What does Paul really believe?”

Paul was a disciple of Rabbi Gamelial. Paul was astute in the Scriptures and he was an expert of the Torah. Therefore, it would be easier for Paul to quickly grasp Yahoshua’s teachings, compared the twelve disciples because of Paul’s advanced knowledge of the Torah, Prophets, the Psalms. I can just imagine how Paul was in awe when his eyes were opened to the truth that Yahoshua is the Messiah. How small, Saul must have felt, to know that he persecuted Yahoshua in ignorance. It is no wonder he changed his name from Saul to Paul, meaning small. But filled with the same zeal he had when he persecuted the followers of Yahoshua, Paul went forth to preach the gospel of the Kingdom of God, expounding on the grace of God found in the gospel of the Kingdom of God.

That is why in Luke 3:8-9, Yochanan as he baptized people in the Jordan River, rebuked the Pharisees saying, 8 “Bring forth therefore fruits worthy of repentance, and begin not to say within yourselves, We have Abraham to our father: for I say unto you, That God is able of these stones to raise up children unto Abraham.  9 And now also the axe is laid unto the root of the trees: every tree therefore which bringeth not forth good fruit is hewn down, and cast into the fire.”

We see in Luke 7:30, that the Pharisees and lawyers rejected the counsel of God against themselves, being not baptized of him (John). This is because the mindset of being a Pharisee blinded Paul to the fact that Yahoshua was Messiah. The Sanhedrin had an expectation that they would have the power to select who would be the messiah; and that they would brief him on the diligence of their activities while they waited for his arrival.

As a result, they generated volumes of data to present to the Messiah to bring him up to date on the laws they had created and enacted in his absence, so they would have either a smooth transition of leadership, or his blessings to approve their actions. But Yahovah had a different plan for how His appointed King, the Messiah, would take his position on King David’s throne, over the Kingdom of God.

In Deut 30:19-20, 19 I call heaven and earth to record this day against you, that I have set before you life and death, blessing and cursing: therefore choose life, that both thou and thy seed may live: 20 That  thou mayest love the LORD thy God, and that thou mayest obey his voice, and that thou mayest cleave unto him: for he is thy life, and the length of thy days: that thou mayest dwell in the land which the LORD sware unto thy fathers, to Abraham, to Isaac, and to Jacob, to give them.

Because the crucifixion of Yahoshua was a legal process for the redemption of mankind from the kingdom of darkness, every segment of the redemption law had to be carried out meticulously, in order to remove the curse of sin, the death penalty of sin, and full redemption from the Kingdom of Darkness. That is why, Yahoshua proclaimed in Mark 1:15: “The time has come! The Kingdom of God is near. Repent and believe the Gospel!

1 Response to The Gospel of the Kingdom, Part 1–It’s Not As You Perceive-73