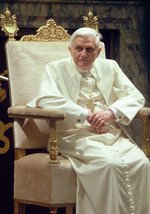 Not sure how we missed this one. In November of 2012, Pope Benedict XVI released a book entitled “Jesus of Nazareth–The Infancy Narratives.” In this book, the former pope cites a number of problems associated with some of the long-held traditions of Christmas that include:

Will the former pope’s book change the thinking and belief systems of the many millions of Christians around the world? Most likely not at all. According to Alessandro Speciale, Vatican correspondent for the Religion News Service: “the pope is a traditional man and he doesn’t want people at all to change their traditions.”

Certainly, traditions of man hold a powerful choke-hold on most people around the world. Our Lord and Savior Yeshua Ha Meschiach called out those who put aside the great commandments of the Father for the traditions of the elders (Mark 7:8). Paul warned of the harm to be had by men who hold fast to the traditions of men while rejecting Yeshua (Col. 2:8).

It is clear that many of the traditions that many of us sacred to our Christian lives are nothing more than lies and fables and are not based upon any semblance of truth. Unfortunately, many of these traditions bring us a sense of comfort that is often lacking in today’s tumultuous world. Yet, the still small voice of the Father calls out to us as it once did for Moses. That voice is calling us to adopt truth and to obedience and to cut loose the traditions that so tightly binds us. Blessings.